Health Translations
Welcome to the Victorian Refugee Health Network. We work to develop responsive health service systems that meet the needs of people from refugee backgrounds, including asylum seekers. 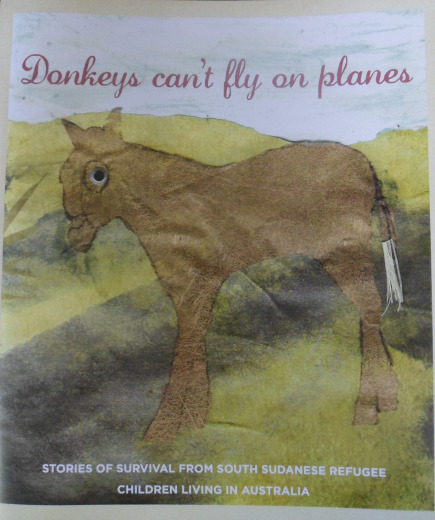 Steven the donkey – the story of Sunday Garang

I was born in a refugee camp named Kakuma, in Kenya.  In the camp, our life was difficult.  We had no pillows but we all had a blanket.  My family also had a very special helper.  It was a small donkey named Steven.

The camp was a sad place to be because there was usually no food to eat.  When my family and the other families had no food to eat, we would begin to starve.  Starving feels like when you are so hungry your tummy hurts.  It makes rumbling sounds inside you that can go on for a very long time.  We had nothing really to feed Steven either.

When I was starving, I could not cry because I did not have enough energy to make the crying sound or to squeeze tears from my eyes.  When we went to bed hungry, my mum would try to make us feel better.  She would say, “There is food growing right now while we sleep.  It will be ready soon.”  She was right because we had been given some seeds to grow.  There were carrot seeds and some other vegetables.  I did not want to go to sleep while the food was growing.

Sometimes I would drink from my mother.  She made her own milk for me but she needed to eat food to make the milk.  We did have a lot of water in the camp.  I would climb on Steven and he would take me to collect the water for the people.  I liked to put the water that Steven collected on to the vegetables to help them to grow.  Everyone took great care of the growing vegetables.

I could go on my own because the well was not too far away.  It would take about twenty minutes to get there but I knew a shortcut and I could get there in about five minutes.  I always took the shortcut because I would gather water many times in one day.  I would give water to people for drinking, for people who were starving and sometimes for cooking.

I tried very hard to always be back in the camp before it got too late.  If I got home late my mum would get cross with me because if you are a little girl on your own in the dark, someone might kill you.

When we came to Australia, I had to leave Steven behind.  Donkeys can’t fly on planes.  I miss him but now he is helping my cousin’s family to collect water for the people in Kakuma.  I hope the people who have Steven remember to take the shortcut. 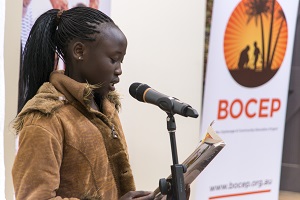 Sunday Garang reads her story, Steven the donkey, at the launch of Donkey’s can’t fly on planes.

Donkey’s can’t fly on planes can be purchased here, with all proceeds from the sale of the book going directly to the Bor Orphanage & Community Education Project Inc. to assist in the construction of an orphanage/school for recovering victims of war in Bor, South Sudan.

As a network member, we will provide you with practical resources, advocacy and networking opportunities to keep all members informed and connected